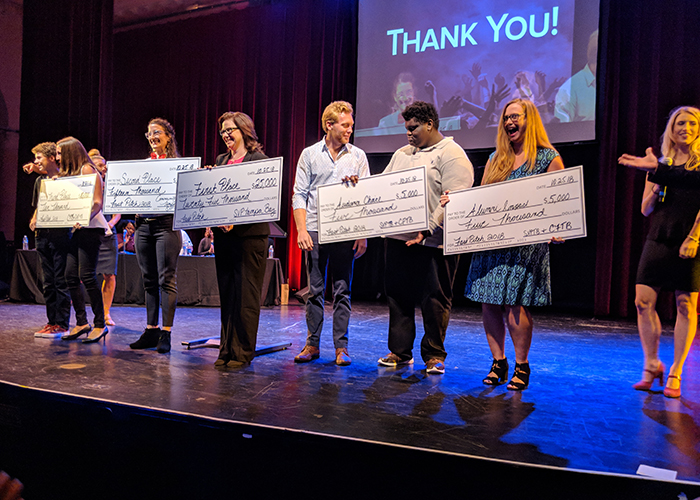 McKnight found it in Shepherd’s Village, a Largo-based nonprofit that offers single mothers career guidance, life skills training, a place to live with their children and a community of other moms dealing with similar circumstances.

Today, McKnight is a Shepherd’s Village graduate and the organization’s administrator and community outreach assistant.

She is also one of the success stories that helped Shepherd’s Village earn the $25,000 first place prize at Social Venture Partners (SVP) Tampa Bay’s 2018 Fast Pitch event last week at the Palladium Theater in St. Petersburg.

Fast Pitch is a “Shark Tank”-style contest in which Tampa Bay area nonprofit organizations and socially conscious business enterprises pitch their innovative operating models to a panel of judges and a live audience.

McKnight says the group started five years ago with a “moving truck full of donated furniture and a vision to use repurposed furniture to repurpose lives.”

So far, the organization has housed more than 280 single mothers and reached thousands more through its SV University program.

In total, Social Venture Partners Tampa Bay and its partners and sponsors awarded $60,000 in funding at the event.

And the winners are …

Sewn Apart earned the $15,000 second prize. Tampa resident Ericka Leigh started that “environmentally and socially conscious fashion-forward accessory company” in 2016. Leigh makes and sells specialty bow ties- including a bright red one she wore for the event- from discarded clothing and textiles that would very likely otherwise end up in a landfill. Leigh described it as  making “new fashions out of old fashions.”

Sewn Apart donates a portion of sales revenues to organizations such as The Sustainable Living Project, a nonprofit urban farm and education center.

Indi-ED, an independent K-12 school near downtown St. Petersburg that is working to reimagine education with a curriculum tailored to meet students’ interests and individual abilities, earned the $10,000 third place prize. The school is now in its third year of operation.

Laurenzi says the funding from SVP Tampa will go toward helping some families the school has had to turn away with tuition assistance.

SailFuture, a Sarasota-based residential group home for 15- to 18-year-old boys in foster care and after-school mentoring program for at-risk youth, took home the $5,000 audience choice award. Sailing is a unique part of that program’s team-building focus and SaliFuture’s fleet of sailboats includes the 65-foot Defy The Odds. SailFuture founder Michael Long and graduate Andre Lewis, who went through the residential foster care program and on to college, says the organization is filling a need at a time when less than half the children in foster care graduate high school and less than one percent graduate college.

During the event, audience members in the packed theater could use their cell phones to donate to the 10 organizations that made the finals out of the more than 50 that applied. Those organizations then participated in a six-week business accelerator program leading up to the Fast Pitch competition. The other finalists were Autism Shifts, Florida CEED, Great Exploration’s Children’s Museum, the Pinellas County Urban League and the Louise Graham Generation Center.

SVP Tampa is the local chapter of SVP International, a philanthropic group that helps nonprofits develop business plans for long-term sustainability in a time of uncertainty for government funding and private donations.

Since forming in Seattle in the 1990s, SVP International has awarded approximately $70 million in funding to 900 organizations.